Published on September 20th, 2011 | by gatsbyadmin

SOHO House – West Hollywood
“Opened in spring 2010, SOHO House West Hollywood is our second American House and occupies the top two floors of the 14-storey, 9200 Sunset Boulevard.” Short and sweet is how it sounds and how it looks is nothing but extraordinary. The SOHO House WH is nothing short of amazing. Recently we were blessed to be in this fine establishment for a party. It astounds with lavish touches and brings the etiquette and ambiance to a new dimension. It caters to the members of the SOHO and the extremely sought after celebrities and people of Gatsby!!!
Inquire about a membership today….

The bar in the Sky penthouse offers views over LA, while the terrace garden dining area is lined with olive trees and covered by a retractable roof. There is also a comfortable sitting room and a private dining and bar area for members’ events and screenings. If you are fortunate enough to receive an “invite” – you must go to this place. It is worth the evening on top of the LA social scene looking down on Tinseltown!!! 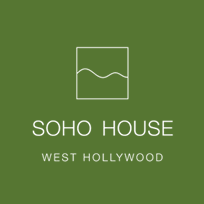